Knowing the exact function of each switch on the electrical panel will help you to figure out the cause each time the electricity cuts out, and to avoid greater problems.

The PCS is in charge of cutting the electrical supply upon command more power than has been ordered, or in cases of overload or short-circuits, in order to avoid damages to the installation.

In some cases, the PCS is separated from the rest of the switches, with its own cap and seal (in the case of an old panel without a remote-controlled management system). This is so that it is not handled, replaced or bridged, given that any of these actions would mean defrauding the system. In new meters, the PCS is integrated into the panel itself, so it’s not necessary to take measures to prevent it from being handled.

The Automatic General Switch is an element only present in recently-installed electrical panels. If your electrical panel is old, you will not find one inside it. Its function is to cut off the electricity for the entire building in the event of a short circuit or a power overload, whether due to a large number of domestic appliances turned on or because of a short circuit.

The AGS monitors that the installation’s maximum limit is not exceeded. You could have ordered 10 kW of power, but if your installation is not equipped to handle more than 6 kW, it will serve no purpose, given that the AGS will shut off when those 6 kW are exceeded.

This is another item that is obligatory in newly installed electrical panels in order to enhance safety. The surge protector, as its name indicates, protects the home’s electrical apparatuses from being damaged by power surges regardless of their nature.

These voltage peaks may be caused, for example, if lightning strikes during a storm, and may cause damage to the equipment, to the installation and even to people. In the event of a surge, the SP will act as a shield deviating the current to the earth connection, thus avoiding damage to electrical appliances.

The Differential Switch is different from the others. It is easily recognised because it has a swivel lever with it, more commonly called a lock screw. This element protects the installation against current leakages, preventing a “spark” (or something worse still) if we touch a domestic appliance with a loose cable. That’s why, if at any time, the DS shuts off, it’s because a current leakage occurred due to an anomaly in the installation or a defective domestic appliance.

As a general rule, there tends to be a differential for each electrical installation, but depending on the size of the property, there may be two or three to control the different areas of the premises.

These switches separately control the supplying of electricity to different domestic appliances and electric circuits: washing machines, lighting, refrigerators, outlets, etc. They are always together. They are inseparable, like good siblings, and if they detect an excess consumption in one part of the home, the switch concerned disconnects automatically. Thus, only that area is left without electricity, and not the rest of the property.

Like the PCS and AGS, they are magneto-thermal circuit breakers and serve to cut off the electricity manually or automatically, and independently of the apparatuses that depend on them in the event of shortcircuiting or overloading.

SPSs are also useful for construction or maintenance tasks, giving the opportunity to deprive a certain part of the installation of electricity without having to disconnect the entire supply. 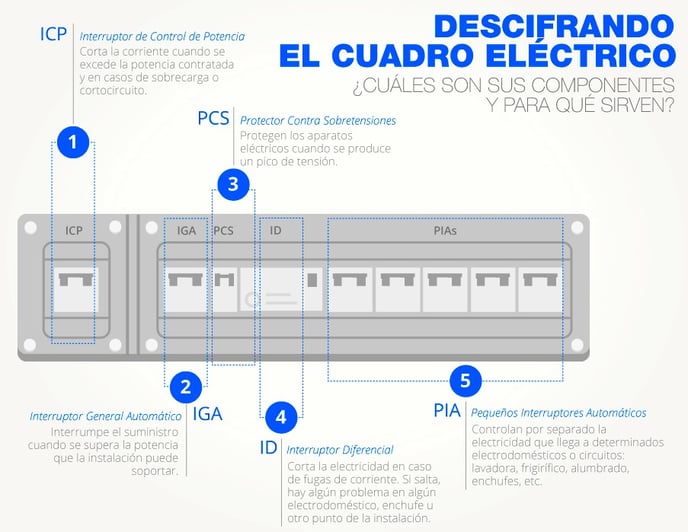 How does the electrical panel help us?

As you will have realised, all the switches, except the differential, are used to cut off the supply manually or automatically in the event of excessive consumption.

So, when you run out of electricity, the first thing you should do is check your electrical switchboard. Depending on the switch that has tripped, you will be able to discover the problem and, therefore, its solution.

For example, if the circuit breaker has tripped, you will know that it is because you are consuming too much energy at the same time. If it is a PIA, it allows you to know the exact area where the incident has occurred.

But if it is the ID that has gone off, you can be sure that it is due to a short circuit generated by an appliance in bad conditions or a problem in the electrical installation.

To detect what it is, you can play with the PIAs to discover the area. Once you have done this, connect the appliances one by one until you see which one is causing the differential to trip. Then, try another appliance in that socket to find out if the problem lies in the device or in the socket itself.

As you have seen, the electrical panel is a seemingly complicated element, but it is not so complicated. Moreover, it will be very useful from now on as its operation is very simple and quite intuitive.